I want to rearrange the positions of the nodes and save the positions.
And later when reloading the page, the API returns some nodes with real locations and some new nodes without locations.

As per my diagram, I have to position the nodes with appropriate locations that have real locations and arrange remaining nodes without locations in Grid layout.

Similarly say me a way to save locations in Layered digraph Layout.

The way that one saves programmatic changes in GraphObjects to model data is via TwoWay Bindings. This talks about that: GoJS Data Binding -- Northwoods Software

For locations, one typically one has a TwoWay Binding on the Node.location property:

Normally, the Diagram.layout will do its layout right after you replace the Diagram.model. However, you can set Layout.isInitial to false to prevent it from doing its automatic layout then.

Where and how do you want those location-less nodes to be placed? GridLayout doesn’t distinguish whether a node already has a real location or not.

In the same diagram , if I have real locations I have to position those nodes and if not then auto layout of grid has to be performed.

Could you please be more specific about where and how they should go?

Suppose Initially I have 5nodes without locations in nodedata array as follows :
[{“region”: “Uk”},

{“region”: “UAE”}]
it has to be arranged as following in grid layout :

After that, I am changing the nodes positions and saving the data.
and again when I retrieve the data, it comes with 5 data with locations (Here I have given with sample locations for example) and also another 5 without locations.
[{“region”: “Utah”,“loc” : “0 0”},

In that case, I have to align the nodes with locations by binding locations and nodes without data as Grid layout as follows in the same diagram itself

There’s an empty spot between Utah and UK. Why?

I still do not have a clear and unambiguous set of rules for the layout that you want to do.

Sorry…I have given locations for sample only…

Clearly…
At first time , API returns array with 5 regions (without locations) and user have rearranged the positions and saved them…

Now I have to arrange these nodes ( locate 5 regions having location as per the locations and another 5 with automatic layout or some else).

Waiting for your help…

If you don’t set Diagram.layout at all, you’ll get something like that behavior. Nodes with real locations remain there; those that don’t are laid out in a grid-like manner, ignoring the pre-positioned nodes.

If you want something different, I’m waiting for a precise description of the behavior that you want.

I have implemented some stuffs after layoutcompleted.

As you said, if I don’t use layout, then what is the alternative for layoutcompleted??

Yes, implementing some layout behavior in a “LayoutCompleted” DiagramEvent listener could work. You would need to look at the value of node.data.loc to see if a location was specified in the model – if not, you would position the node where you want.

I am using angular 4. Can you please demonstrate or give any examples of how to implement custom layout or extensions in angular??

Yes, the default Layout behavior is to position unlocated nodes in a grid-like pattern, which might overlap with already-located nodes.

I’ll see what I can do to help you when I get some free time.

OK Thanks…Please help me around

Here you go: IncrementalLayout that only arranges nodes without real locations and by not overlapping existing nodes
The complete implementation is there on the page.

By the way I have another question : that can I locate nodes with location in this incremental layout itself??

The complete implementation is there on the page.

I don’t understand your second question. 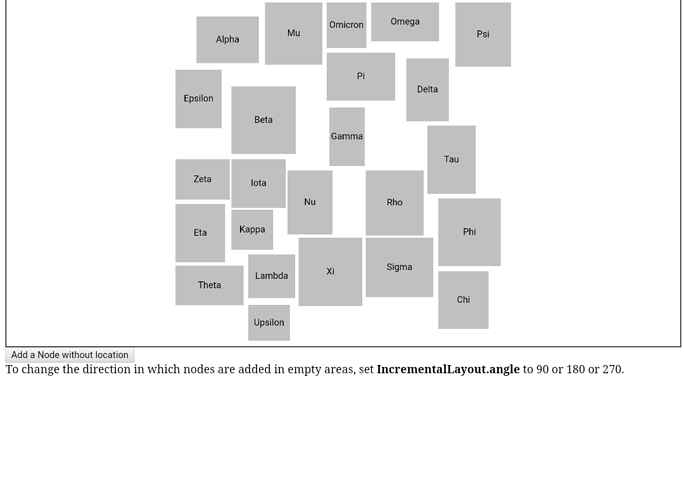 There is no source code link