I have a problem with different types of link curve-types in the same display. I have previously had “JumpGap” as a default, but it tends to be kind of “random” which lines that breaks. To improve this i have added binding “curve” to be able to override this setting and set some of the relations to “Normal” because i want them not to break, but wanting other lines to break on these instead. Is this possible? I can change links to “normal” and cause them not to break, but old links would remain the same - they have gaps where they had originally, and no gaps other places.

Wanted horizontal link to break instead, so made vertical link curve = normal 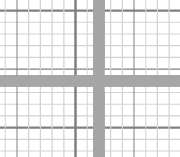 Expected horizontal line to “recalculate” and create gap when crossing vertical line - but that does not happend.

For a link to jump over another link, both of them need to have Link.curve set to “Jump…”. The one that jumps will be the one that is in front of the other.

So you can control which ones do not break by putting them in the “Background” Layer or by setting their Part.zIndex: http://gojs.net/latest/intro/layers.html