I have a problem:
I have a class inherited from GoIconicNode on the GoView and 2 GoLink derived classes outcoming from the node Center (from the same point) in opposite directions. 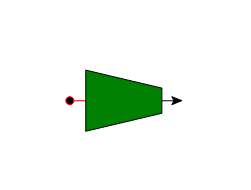 GoLink instances have the following properties:

GoLink instances mustn’t outcome from bottom or top of the node, they must outcome only from its sides (from left and right sides like at the first picture) (It’s shown at the next picture)

Also GoLink instances mustn’t intersect the node, they should simply bypass it without the node intersection they come from.

I suppose I should override CalculateStroke method, but is there more easy way to achieve such behavior. Maybe it can be implemented with GoDiagram standart means, or maybe you have a piece of code which can help me! :blush:

Did you get my email?

Hello, Jake!
Sorry for late answer.
Yes, I did.
I use evaluating version of GoDiagram

Well, the default behavior of GoIconicNode is just to draw to the edge of the node…

but… if in the port on the bottom star, I change the port.ToSpot to MiddleLeft (and also change port.EndSegmentLength to 30 for looks), I get:

There is also a “FromSpot”, which I’m guessing you would want to be MiddleRight.

Jake, thank you for the answer! It helped a little ))

I would like to describe my problems:
My each node has two connectors at its left and right sides. The connectors are implemented as two GoLinks which start from the Center of their node they belong to. I have to connect nodes through their connectors, i.e. the very end of one node connector should be connected to another node connector end. This connection should be done as it’s made in case of GoLink connects to some GoPort. This situation is illustrated at the picture below:

To achieve the desired result, I think that I should perform the following actions:

These are my thoughts how to connect two different nodes through their connectors.
Am I on the right way or far away from the truth? Maybe there is more easy way to implement described behavior, and I just don’t know yet.
Thanks in advance.

Well, I found answers on my previous questions.
But I have the next question:
How is it possible to suppress relinking a link from its FromPort? :persevere:
My application mustn’t allow such behavior.
Thanks.