While setting some properties on one node , I am creating the child of that node and I want to keep parent node & child node relation so tight that no one can change/move that particular link to other node on GUI.

Could you show some sketches or screenshots of how things should be and what situation you are trying to avoid?

Did you want to make the parent-child Link not selectable? Or just not deletable?

Are the nodes separately copyable?

Attaching Screenshot to understand the problem 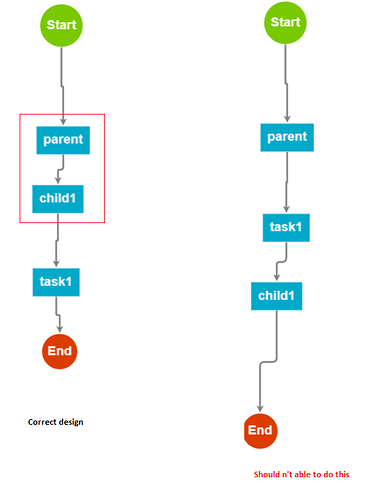 Did you want to make the parent-child Link not selectable? Or just not deletable?
Link can be made non-deletable from the property isDeletable while creating node. But I want that link and child1 node so couply tight that false case shouldn’t happened.

Are the nodes separately copyable?
Child1 node is not able to copy itself but when both parent and client is selected with link as well then should be able to copy as group.

You didn’t say how the user might go from the normal state to the state that you wanted to prevent.

Generally link is detachable and can be attach to other node if you want , so anyone can do intentionally or by mistake to change the parent link to parent to task1 which is earlier parent to chilld1